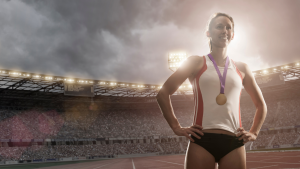 Something is changing in sports sponsorship and it is being driven by the competitors themselves. writes Founding Director Chris Broadbent.

Athletes are no longer the mannequins to be dressed up by sporting bodies and events. And they know it.

Sport has always been a hugely attractive platform for marketing. Beyond the official multi-national partners and supporters of Tokyo 2020, brands right down the food chain manoeuvre to gain exposure and be part of international, national and even local attention that only major events like the Olympics deliver.

But the stranglehold is rarely breached, such is the depth of contracted rights that the major names get for their big bucks, including branding across the event, massive brand exposure through international media coverage and the hugely positive association with success and a healthy image that radiates from the world’s best athletes.

But in recent years, the dynamic has shifted. And it is largely to do with the athletes, now more media savvy than ever before. With the explosion of social media, athletes are more aware than every before of their own value, influence and power….it is literally reflected in their numbers of followers.

It was telling at Euro 2020 when Cristian Ronaldo made a point of removing Coca Cola bottles strategically placed in front of him at a press conference. An estimated $4b was wiped off Coke’s shares as a result.

Elite sportspeople have become emboldened and are speaking now more forcefully on social issues like racism and climate change. Tokyo 2020 organisers quickly back pedalled when they withdrew their plan not to feature any athletes at the Games taking the knee on their social channels. Sport and politics, do mix after all.

Events like the Olympics have traditionally been used by major brands as marketing platforms, but athletes are now finding their voice.  And – off the playing field at least – are less prepared to play ball.

Brands who align themselves with elite sport events and organisations, will likely have to be prepared to have their product or service questioned and be associated with an environment where the expression of political and social opinions will become more frequent. They may even decide that a better use of budget is with individual athletes, where the greater influence is heading.